It's never too late 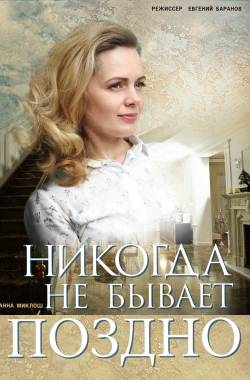 Charming woman Olga is preparing to celebrate the twentieth anniversary of living with her beloved husband. She is happy. Over the years, her feelings only strengthened. Olga always knew she had made the right choice. Together with her husband, they raised two wonderful daughters, one of whom will soon become a mother.

Meanwhile, Igor also chooses a gift, but it is not intended for his wife, and lovers. For several years he has an affair with a charming young woman, for whom he is ready to leave his wife and destroy everything they managed to build. The casual connection grew into something more. Igor throws himself between Olga, with whom he lived for many years in a happy marriage with Larisa, which turned his quiet measured life. The man waits for the right moment to announce that he has fallen in love with another, but the truth is revealed earlier than he planned.

Olga's confession shocked Olga. She can't believe that her lover has betrayed her, but she cares more about what she will say to her daughters. The woman is in a state of shock. It is difficult for her to come to terms with what is happening, to master herself and decide what to do next. For a long time she devoted herself to the family, and now that the children have grown up, her husband is gone, she is left alone and was completely helpless in the face of difficulties. A fragile woman has to go through a difficult path, test herself for strength and rediscover the happiness she deserves.